At a time when it feels like the world needs hope and music the most, Smith felt releasing “Waymaker” in Italian would help spread the song’s message of trusting God to be the light in the darkness.

Smith says, “After seeing the turmoil in the world and especially the devastation in Italy, we wanted to record this version of ‘Waymaker.’ It is such a special song that moves people and brings them to a very special place, but most importantly it brings them hope.”

Campagna, who is of Italian descent and has relatives currently in Italy, was inspired to do something while witnessing the pandemic going on in the world.

“When I saw the video of everyone singing from their balconies in Italy, I was moved to tears. It was the most heart-warming thing I have seen in a long time. I have a lot of family over there, so that hit close to home with me. I thought, what better way to send a message of hope, than the words and music to ‘Waymaker’ in their language. I love you, Italy! Keep the faith, stay strong and keep singing,” says Campagna.

The single has resonated strongly with fans and radio alike and is currently rising on the charts. “Waymaker” has been climbing the top 10 on both Billboard‘s Christian Airplay and Hot Christian Songs charts. Smith and Campagna also sang “Waymaker” during Smith’s “Worship Around The World,” which he led through social media to over 1.5 million views on Sunday March 22, 2020 to help bring the world comfort during this time of uncertainty.

“Waymaker” is featured on Smith’s album AWAKEN: The Surrounded Experience, which was recorded live at Nashville’s Bridgestone Arena.

More About Michael W. Smith:
Michael W. Smith has been releasing new music regularly and performing around the world to sold-out crowds for the last 35+ years. During his storied career, he’s written over 35 #1 songs, been honored with three GRAMMY® Awards and 45 Dove Awards, one American Music Award, was inducted into the Gospel Music Hall of Fame and has sold more than 15 million albums. Amassing an in-depth catalog of achievements, Smith was also recently honored with a star-studded tribute concert in Nashville, TN to celebrate his 35 #1s, by a myriad of legendary performers. His recent USA Today, Yahoo! Music and Billboard-acclaimed studio album A Million Lights and Parade, Good Morning America-featured and GRAMMY nominated live worship album Surrounded have together become his 30th and 31st Top 10 hits on Billboard’s Top Christian Albums chart, more than any other solo artist in history. Inspired by Surrounded Smith hosted “A Night to Pray, Worship and Be Awakened,” the energy, passion and unity of the event is captured as it happened on AWAKEN: The Surrounded Experience, which was released February, 2019. More than just an outstanding songwriter and performer, Smith has given back to the global community throughout his career. Smith has raised funds to battle AIDS in Africa; started Rocketown, a safe haven for young people in Tennessee to meet and find hope; and has helped more than 70,000 children through Compassion International. He has also written several bestselling books, including Old Enough To Know and Friends Are Friends Forever. 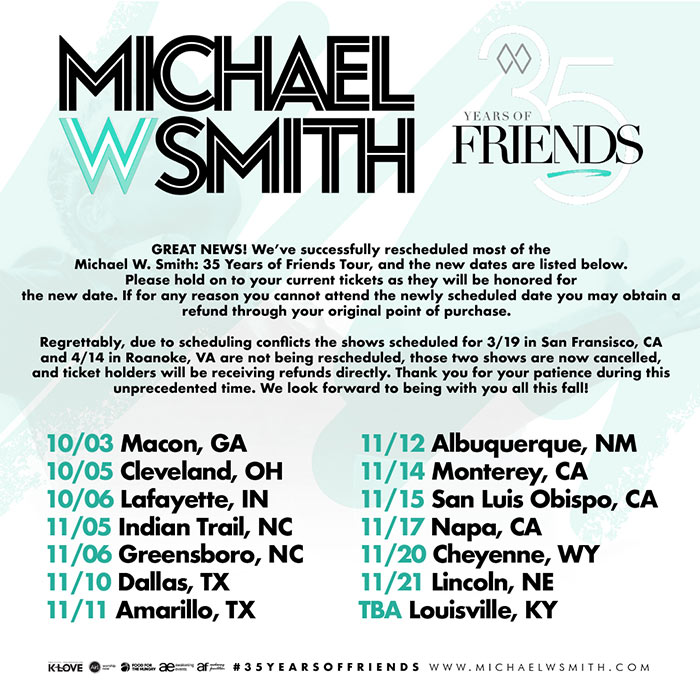