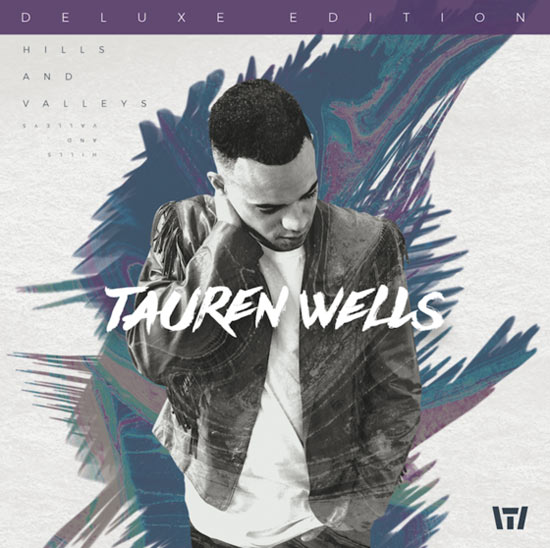 The deluxe edition also includes Wells’ original demo version of “God’s Not Done With You,” along with his rendition of the 1970’s hit “September,” originally recorded by Earth Wind & Fire. Wells will also perform the song while on Lionel Richie’s All The Hits tour.

“Hills And Valleys,” the title track from the new album and the current single, is a top five-selling track in Christian music and already climbing to the top 10 at radio. The acoustic video for the song already has more than two million views, averaging an astounding 25,000 views a day.

“I am so grateful for the opportunity to release my first album as a solo artist,” Wells shares. “These songs have been inspired by God and my relationships with people. My hope was to write songs people needed to hear with lyrics we can all carry into every moment of life. The process of getting to this place was a path filled with many hills and valleys but I’ve seen the faithfulness of God in it all.”

ALL THE HITS – ON TOUR WITH LIONEL RICHIE – Beginning this July Tauren Wells is the opening act for Lionel Richie’s upcoming tour, All The Hits, with very special guest Mariah Carey. Hitting the biggest arenas in 22 markets across the U.S. and Canada, the tour kicks off July 21 in Oakland, CA and will conclude September 5 in Seattle, WA. For the most updated schedule and to purchase tickets, visit the tour page here.

Immediately following the All The Hits tour, Wells will join Air1’s Positive Hits Tour this fall. For the most updated information and tour dates, please visit his website at  TaurenWellsOfficial.com.

ABOUT TAUREN WELLS: Wells, a two-time GRAMMY® nominee, debuted his first solo EP, Undefeated, in 2016 with the impactful single of the same name and featuring Reach Records’ rapper KB. “Undefeated” also served as the soundtrack for the internet-famous Dude Perfect’s “World Records Edition” episode on YouTube which, along with another Dude Perfect video featuring the No. 1 single “Love Is Action,” has garnered 73 million views combined. Additionally, “Undefeated” is licensed by Fox Sports and heard regionally during NBA coverage.

“I feel called to call greatness out of people,” the Houston native shares. “If people have spoken a low expectation of someone’s life, I want to be the voice that raises the ceiling and makes them feel like they can do something great.”

Never Have I Ever  -  Hillsong Young & Free

Only U  -  Aaron Cole feat. Terrian