Earlier this month, five-time GRAMMY® nominated artist Matthew West launched “The Matthew West Podcast,” whichdebuted No. 1 on the Apple Religion & Spirituality chart. This week, West welcomes former Olympic gymnast Shawn Johnson and NFL player Andrew East as guests, as well as he and his wife Emily are featured on their podcast, “Couple Things,” available today. “The Matthew West Podcast” is available on best-selling author, speaker and popular podcaster Annie F. Downs’ “That Sounds Fun Network.”
Listeners can check out the six episodes currently available with a new episode releasing weekly. This month, West has featured Casting Crowns’ frontman Mark Hall, mother and daughter Korie Robertson and Sadie Robertson Huff, best-selling author and pastor Max Lucado, NBA player Cody Zeller and a special Q&A episode with West. Click here to check out “The Matthew West Podcast.”
In addition to the successful debut of his podcast, West was recently nominated for four GMA Dove Awards. He received two “Song of the Year” nods one for his No. 1 hit “The God Who Stays” and Casting Crowns’ hit song, “Nobody,” which also earned him a GRAMMY nomination this year, as well as the nomination for “Pop/Contemporary Recorded Song of the Year.” He was also nominated for “Songwriter of the Year (Artist),” which he won in 2018. The 51st Annual GMA Dove Awards will be held Friday, October 30 on Trinity Broadcast Network (TBN).
ABOUT MATTHEW WEST:
Matthew West is a five-time GRAMMY® nominee, a multiple ASCAP Christian Music Songwriter/Artist of the Year winner and a 2018 Dove Award Songwriter of the Year (Artist) recipient and has RIAA Gold certified and RIAA Platinum certified singles. He has received an American Music Award, a Billboard Music Award, a K-LOVE Fan Award and named Billboard’s Hot Christian Songwriter of the Year. West also received a Primetime Emmy® Award nomination for Original Music & Lyrics for the title track for the feature film “The Heart of Christmas.” In addition to his own recording career, he has more than 130 songwriting credits to his name, including cuts by Rascal Flatts, Scotty McCreery, Michael W. Smith, Amy Grant, Mandisa, Danny Gokey and others, along with back-to-back No. 1 songs by Casting Crowns including their single, “Nobody,” which features West. He was also nominated for a GRAMMY Award in 2019 for Casting Crowns’ song, “Only Jesus,” as a songwriter. West also co-wrote Jeremy Camp’s multi-week No. 1 song, “Keep Me In The Moment.”
Earlier this year, he released his new studio album, Brand New, which already produced the multiple-week No. 1 single, “The God Who Stays.” During the COVID-19 pandemic, West has continued to host his weekly “Quarantine Quiet Time” from his home studio with his family, and he released two new songs that went viral: “Quarantine Life” and “Take Heart.” In August 2020, he launched his official podcast, “The Matthew West Podcast.”
Adding author to his list of accolades, West has written five books to date: Give This Christmas Away, The Story Of Your Life, Forgiveness, Today Is Day One and Hello, My Name Is. He is also passionate about providing hope and healing through the power of prayer and story. Along with his father, Pastor Joe West, they founded popwe, a non-profit ministry helping others to craft, share, and live a more meaningful life.
Please visit popwe.org for more information.  MatthewWest.com 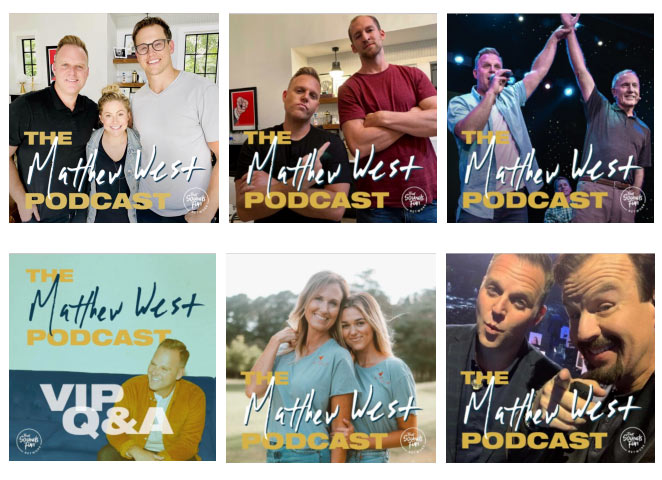